The Smart Spike System has been designed as an extendable speed bump, developed to help police offers in law enforcement operations at roadblocks. The system features spikes built into the speed bump and a remote control device that can be used to activate/deactivate the spikes to stop vehicles, reducing the risks and increasing the safety distances for police officers

EASY TO USE: Simply deploy the Smart Spike System device on the road surface and press the button to automatically activate the spike system.

SAFETY GUARANTEED DURING USE: With the Smart Spike System, the operator can stand at a safe distance to increase the safety levels and reduce the risk of personal injury. In addition, spikes are covered by a protective sheath to prevent injuries while they are being handled.

DUAL FUNCTION: When the Smart Spike System is disabled, it can be used as a speed bump.

QUICK RESPONSE: The Smart Spike System must be deployed at the desired location before the vehicle moves close to it. Spikes can be activated using the remote control device before the suspect’s vehicle approaches; these can be deactivated before police officers reach the device, so they can safely drive over it.

EASY TO MAINTAIN: To guarantee its proper operation, the Smart Spike System automatically performs a series of self-checks after it has been activated. After use, simply replace worn spikes using the spike replacement tool supplied. 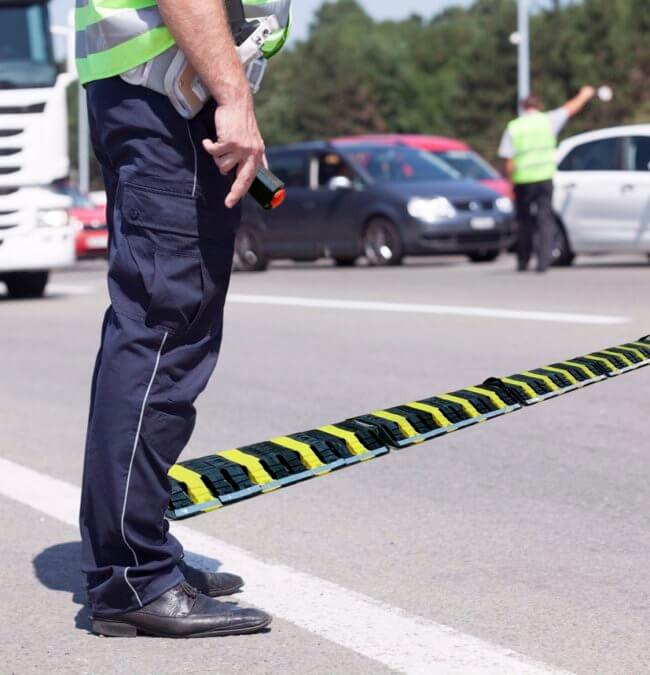